Command your army to victory in the epic MMO modern combat RTS game - War Inc.! The year is 2085. In the wake of World War 3, leading governments have crumbled in the face of annihilation and a new power has emerged known only as the War Corp. Build powerful towers, form an advanced army, and conquer your enemies in intensive battles against rogue commanders and thousands of foes online in a world of war-torn lands for precious resources and glory!!! War Inc. is a modern military strategy game with a stunningly detailed combat system, immersive battle gameplay, intelligent units, and in-depth strategy that will keep you planning, playing, and outwitting your opponents at every turn. Do your duty for the modern world and combat your foes. This modern war game lets you train your army to prepare for a multiplayer RTS battle at any time. Hire powerful Commanders, build an army of fast-paced Marines and Snipers, or heavy Mechs, Scorpion Tanks, and Walkers to reduce your enemy's base to rubble! ~~~~~~~~~~~~~~~~~~~~~~~~~~~~~~~~ Do you have what it takes to conquer and command the War Corp and rise to glory? ***FEATURES*** ►AMAZING GAMEPLAY The most comprehensive military battle game on the mobile! Deploy nuclear missiles to annihilate the enemy, send in drone strikes to carpet bomb the base, use precision demolition bots to break defenses, and send in heavy artillery for your ultimate ground assault! ►DEADLY ALLIANCE Forge powerful alliances with fellow commanders and band together in your global quest for domination. Share units, help speed up production, and wage EPIC wars against enemy alliances to climb the ranks and win precious fusion! ►POWERFUL COMMANDERS Hire and collect the most powerful command cards in the War Inc. universe and unleash true destruction on all who oppose your might! Death Rays, Ex-KGB agents, super secret HAARP weapons, Stealth and Shield generators, and many many more are just a tap away, awaiting your command! ►DEEP UPGRADE SYSTEM Enhance your base regularly through detailed and thorough upgrades across all levels! Turn your Command Centre into an unbreakable fortress, level up your Chain Gun into a deadly machine, unlock powerful Researches and Upgrades, and enhance your walls to make your base impregnable! ►MASSIVELY MULTIPLAYER Battle against foes from all over the world! Join millions of players online in combat to claim your stake in the War Corporation Rankings, pile up resources from enemy commanders, form friendly alliances, and band together in your quest for world domination! ►GRIPPING SINGLE-PLAYER CAMPAIGN Battle through hundreds of missions given to you by the War Corporation against the Rebellion as you complete contracts, bring the rebels to justice, and uncover the dark truth behind the War Corp as the campaign unfolds! ~~~~~~~~~~~~~~~~~~~~~~~~~~~~~~~~ Do your duty for the modern world and fight back against the War Corp! Download War Inc. – Modern World Combat for FREE today and see if you have what it takes to command a military alliance to victory! Disclosure: The game is free to play, however in-app purchases are available for additional content and premium currency. In-app purchases range from $0.99 to $99.99. Note: A network connection is required to play If you have any problems, suggestions, or would just like to drop us a note, please visit: support.tango.me This application is developed and managed by Mindstorm Studios. For the Privacy & Cookie Policy, please visit http://www.mindstormstudios.com/privacy.html  . . 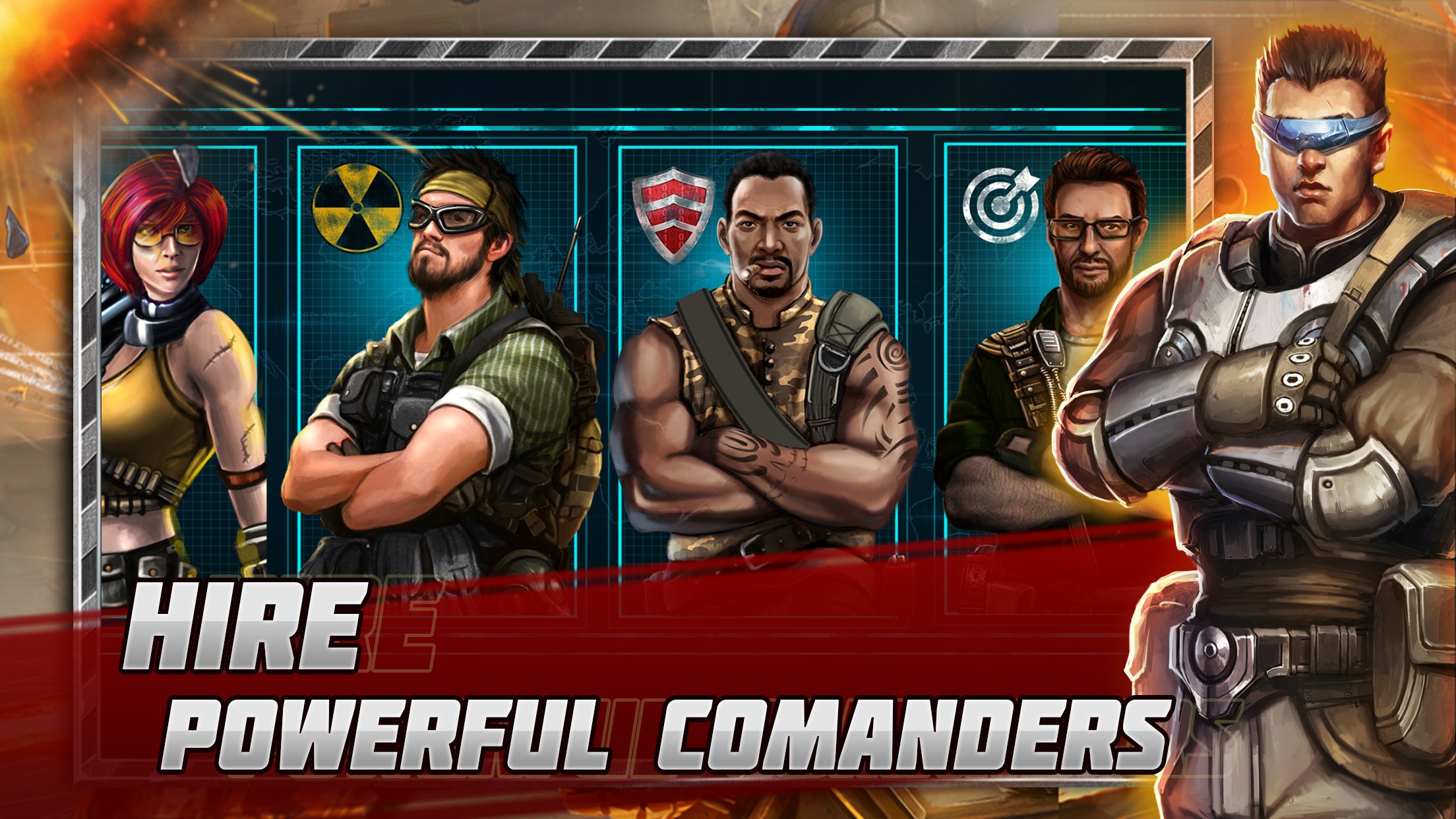 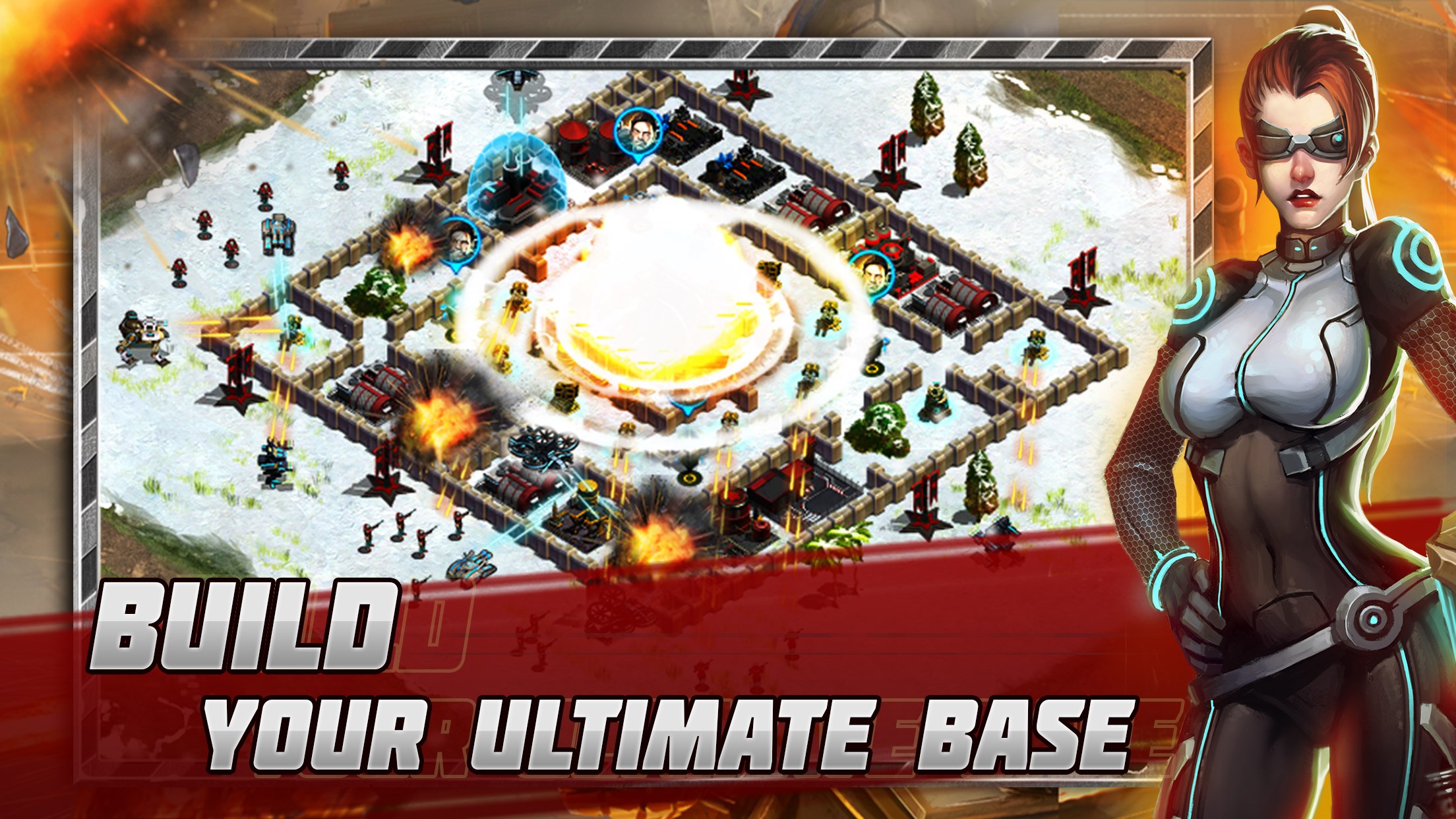 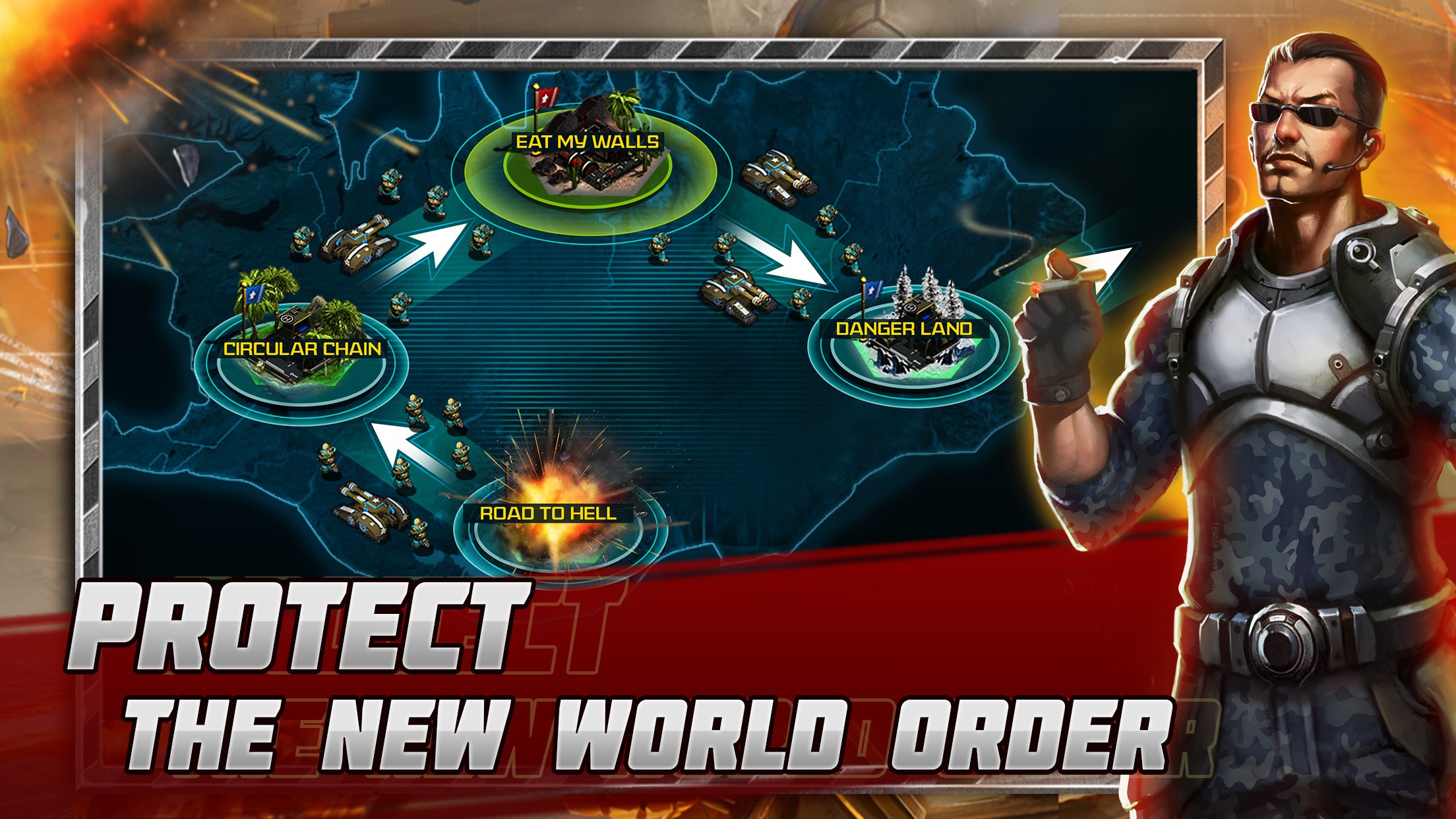 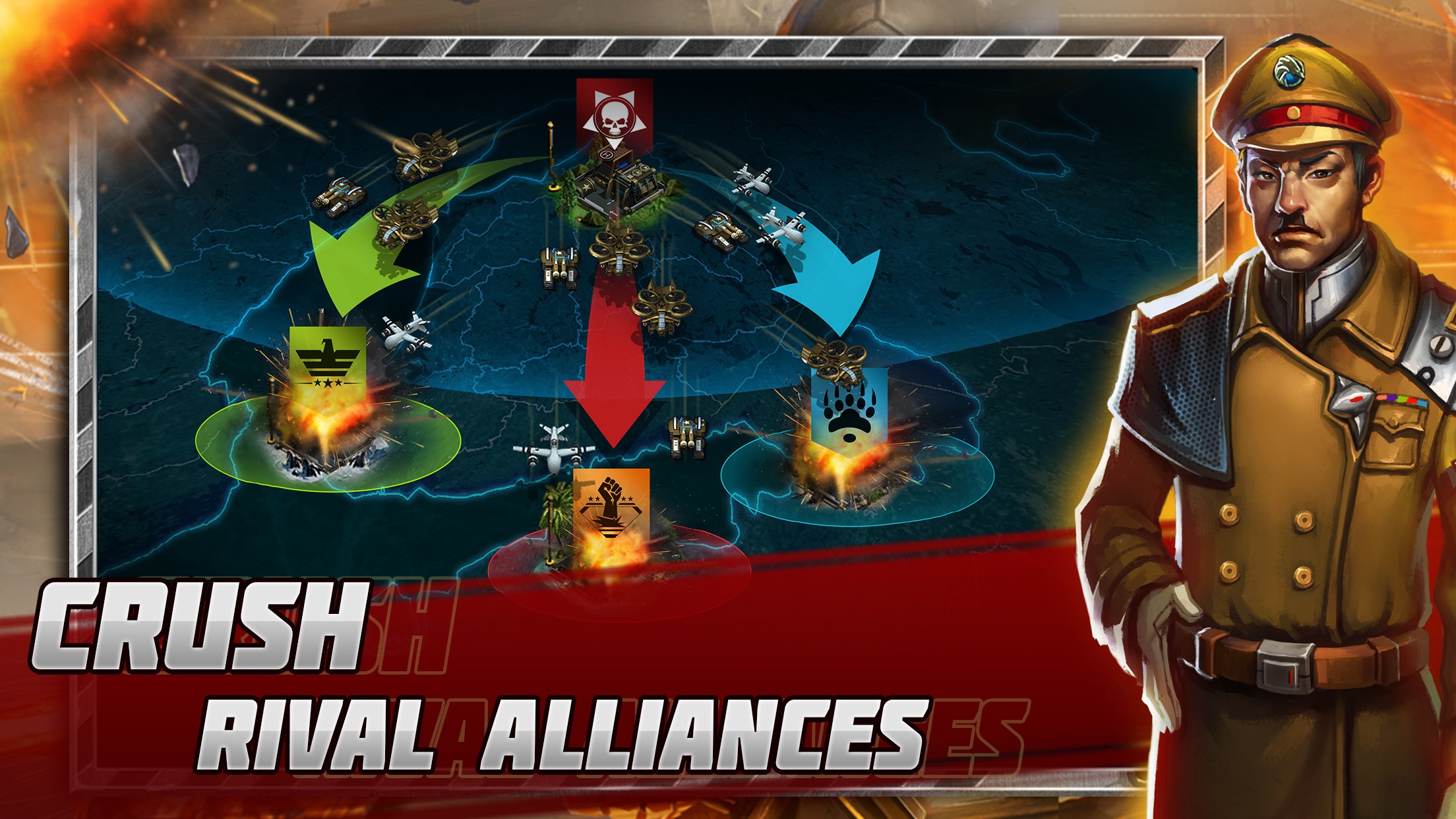 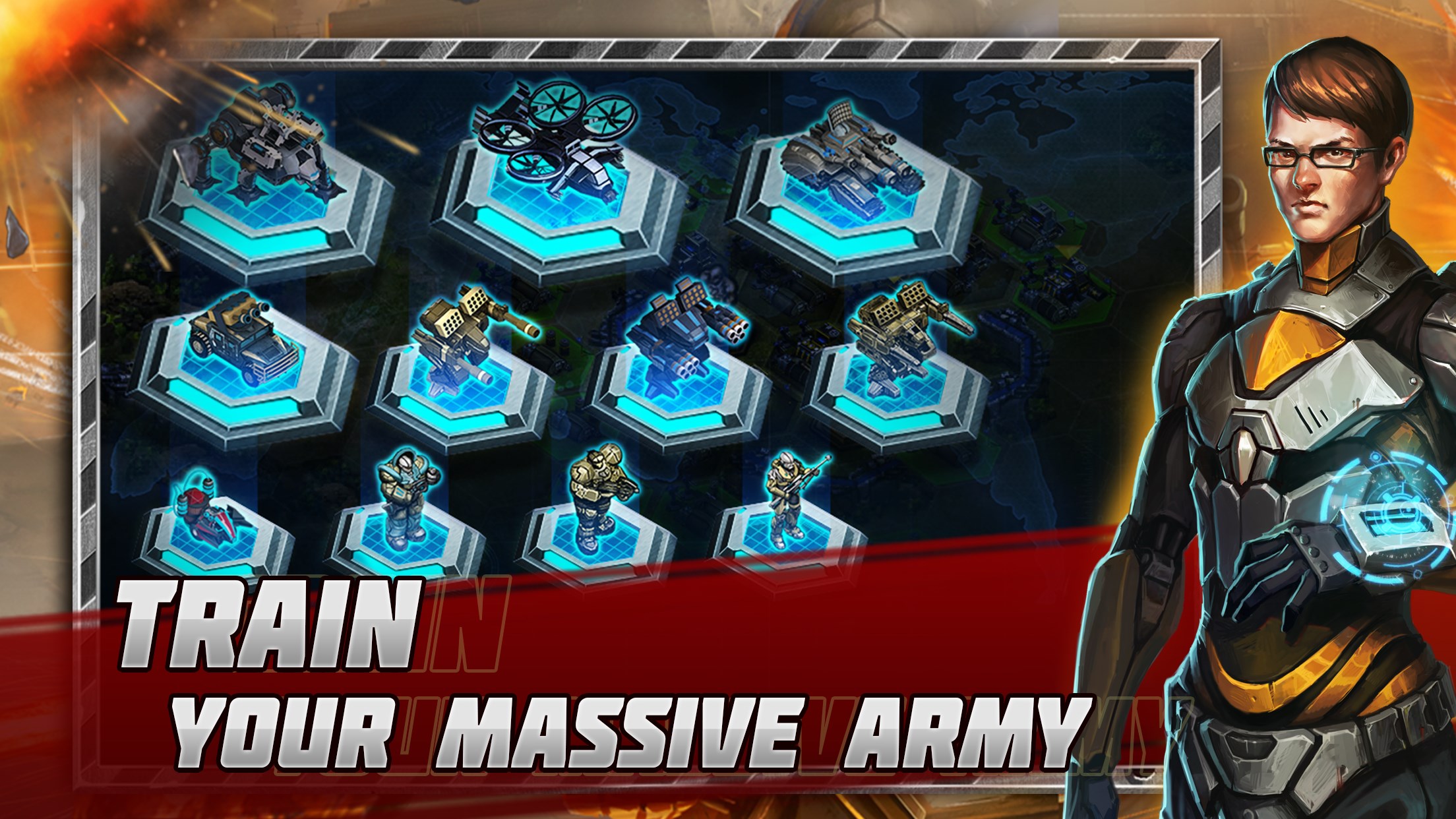 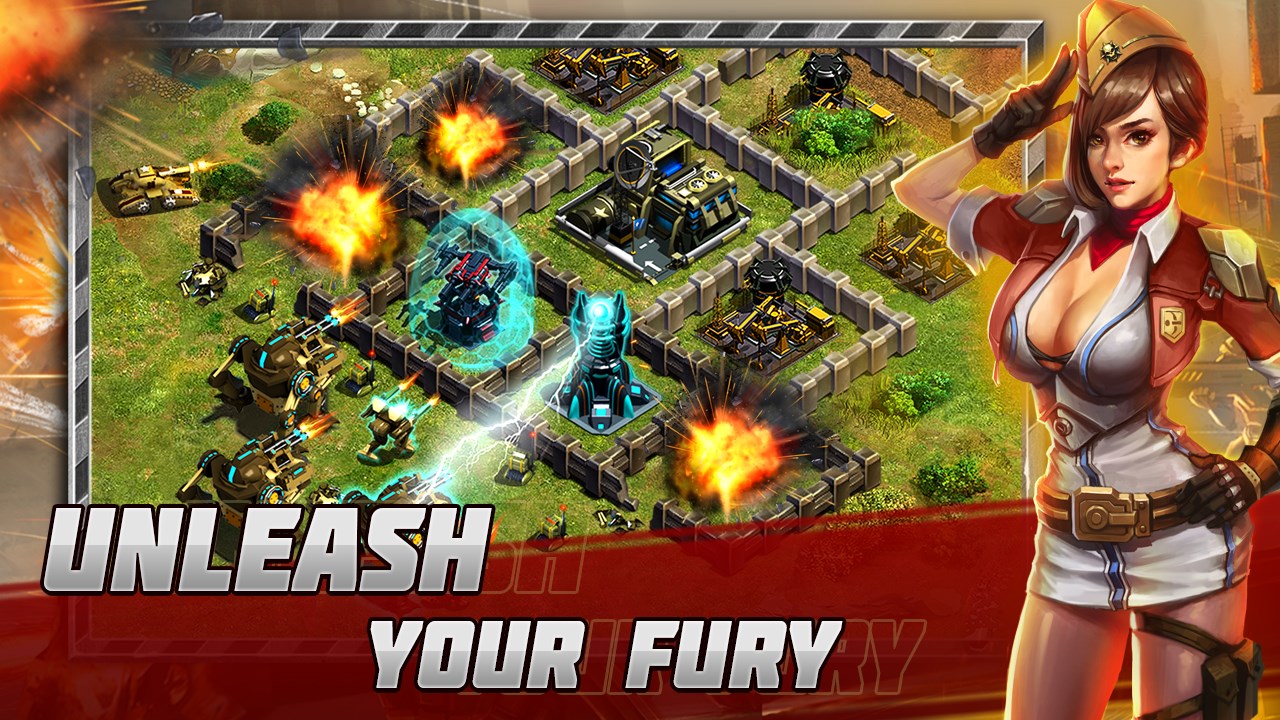 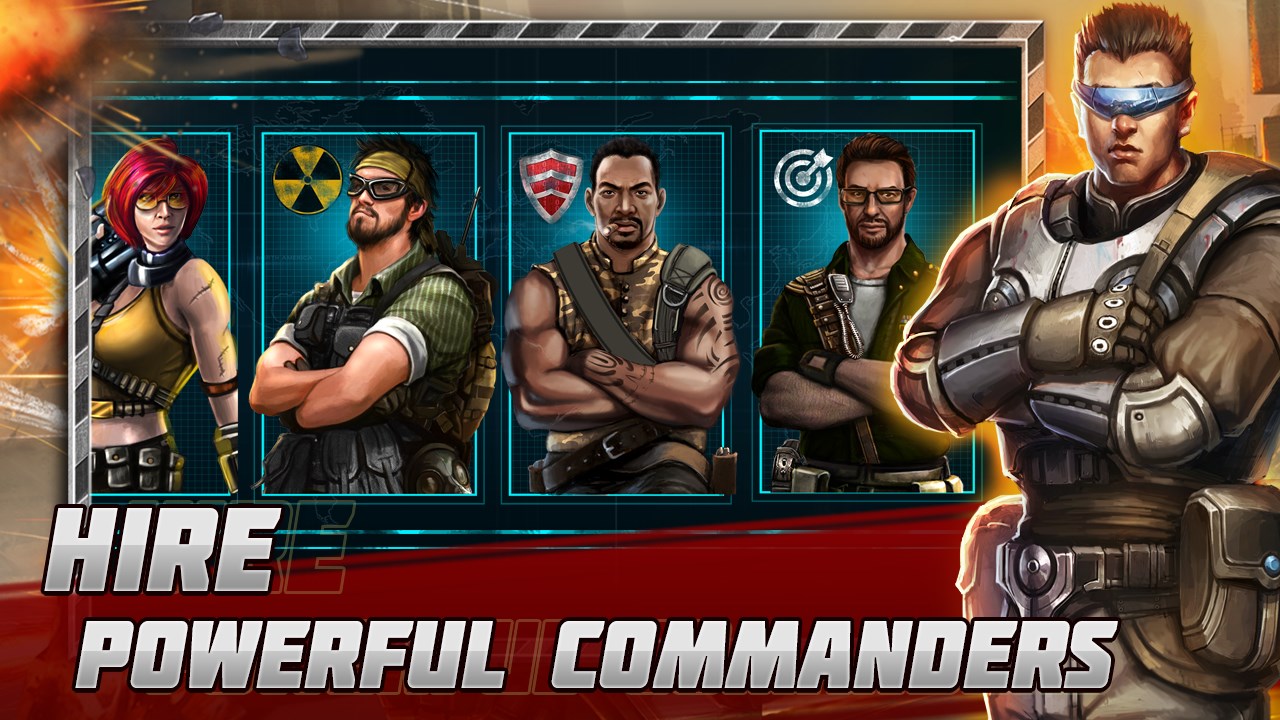 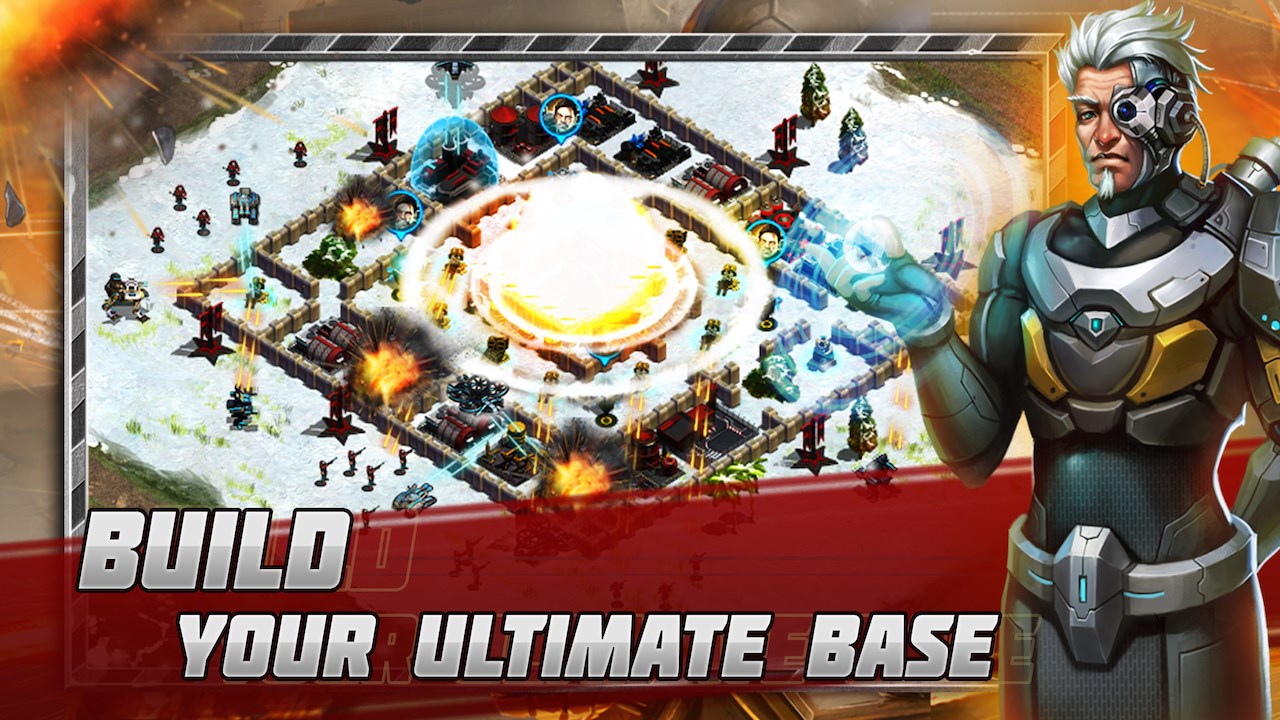 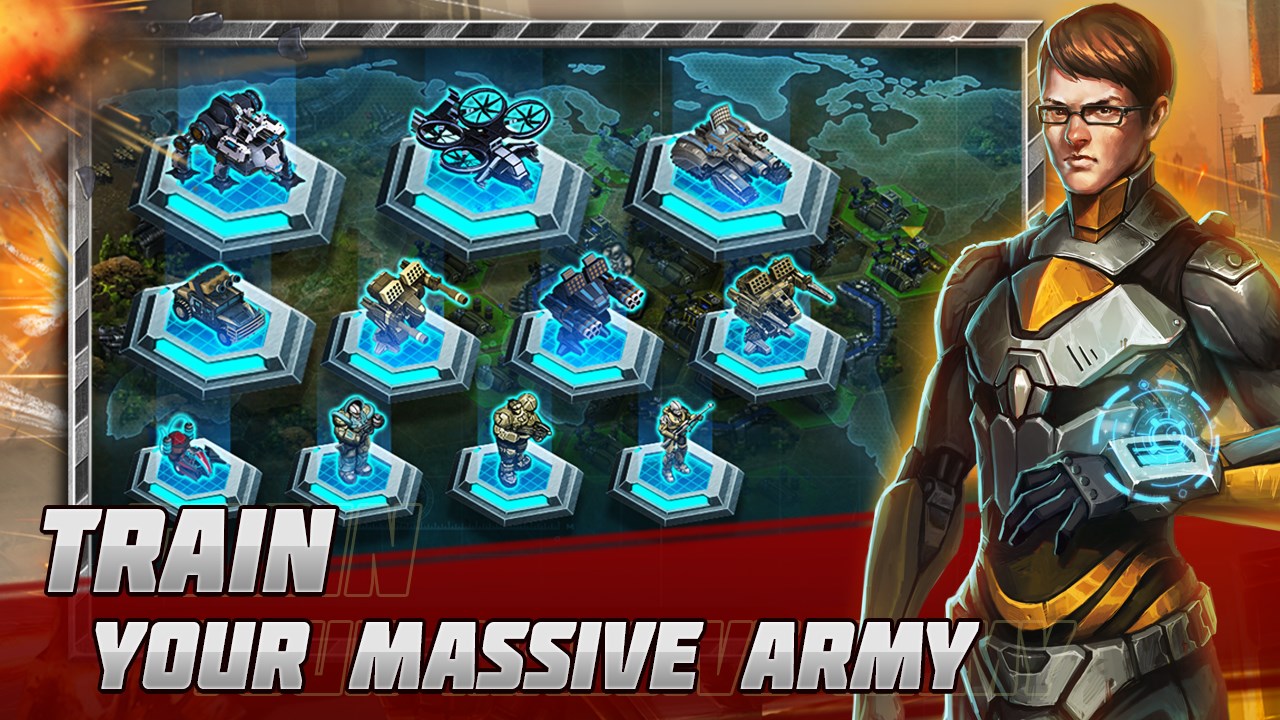 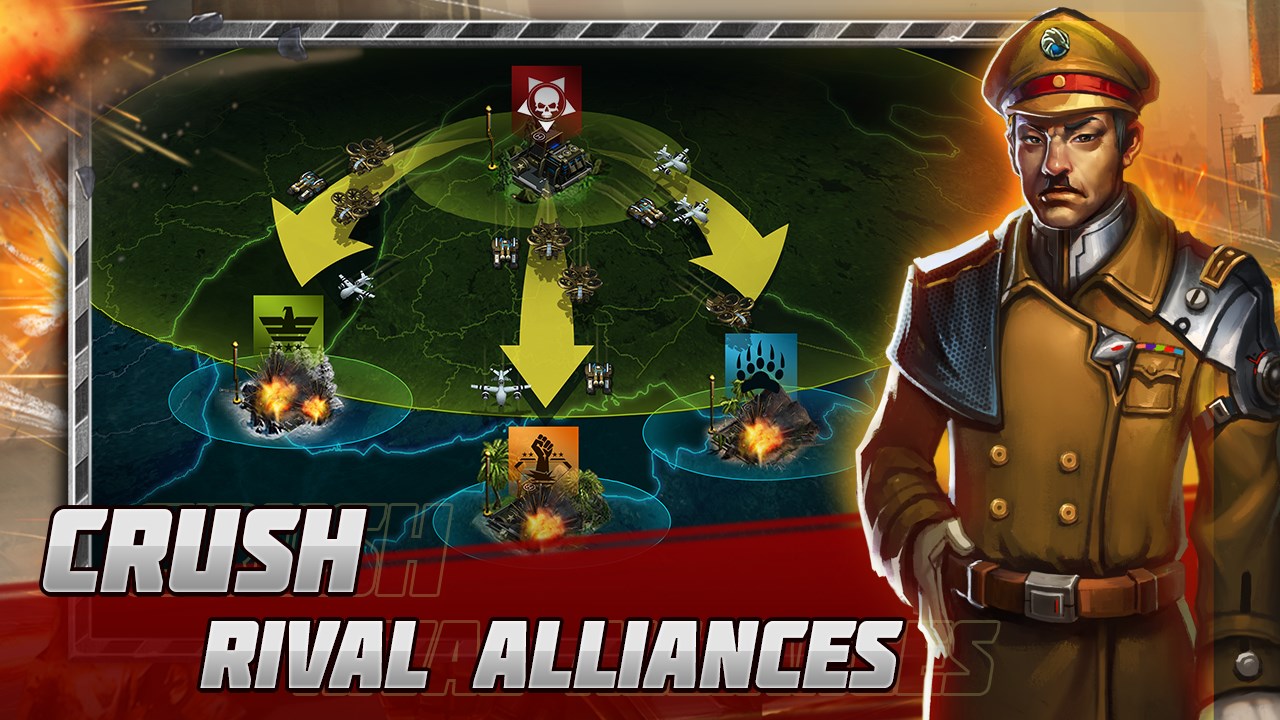 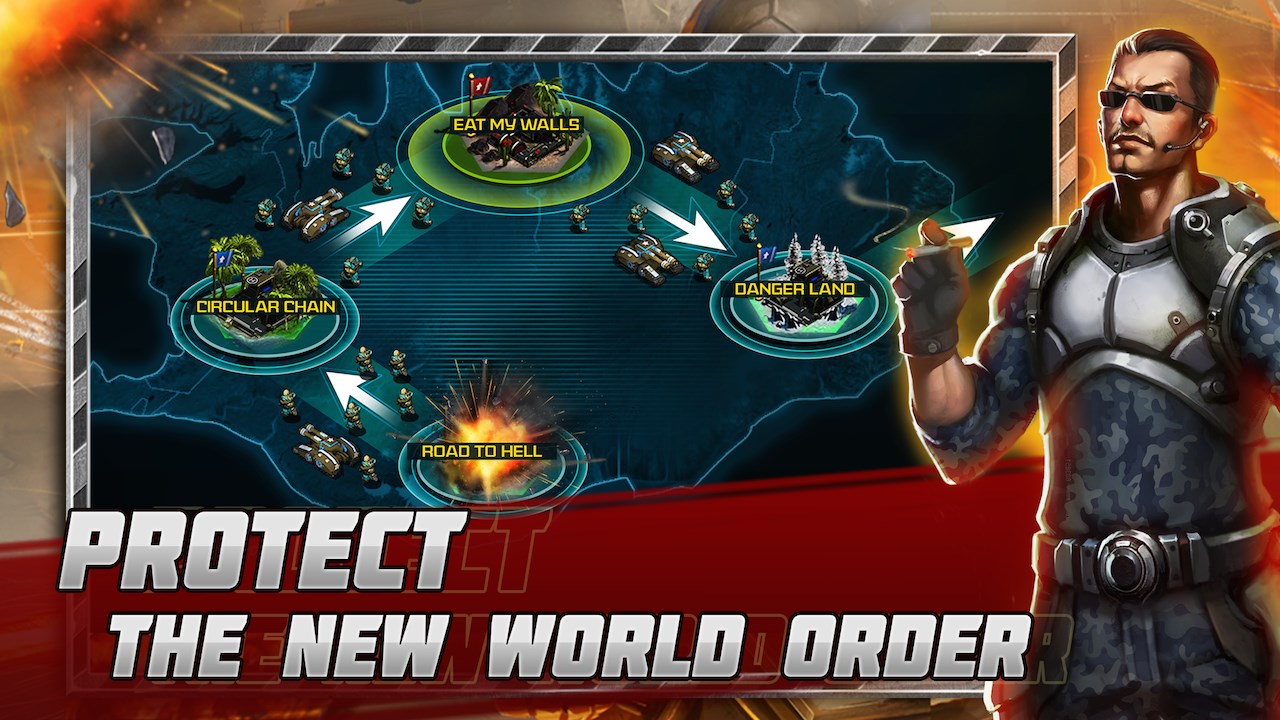 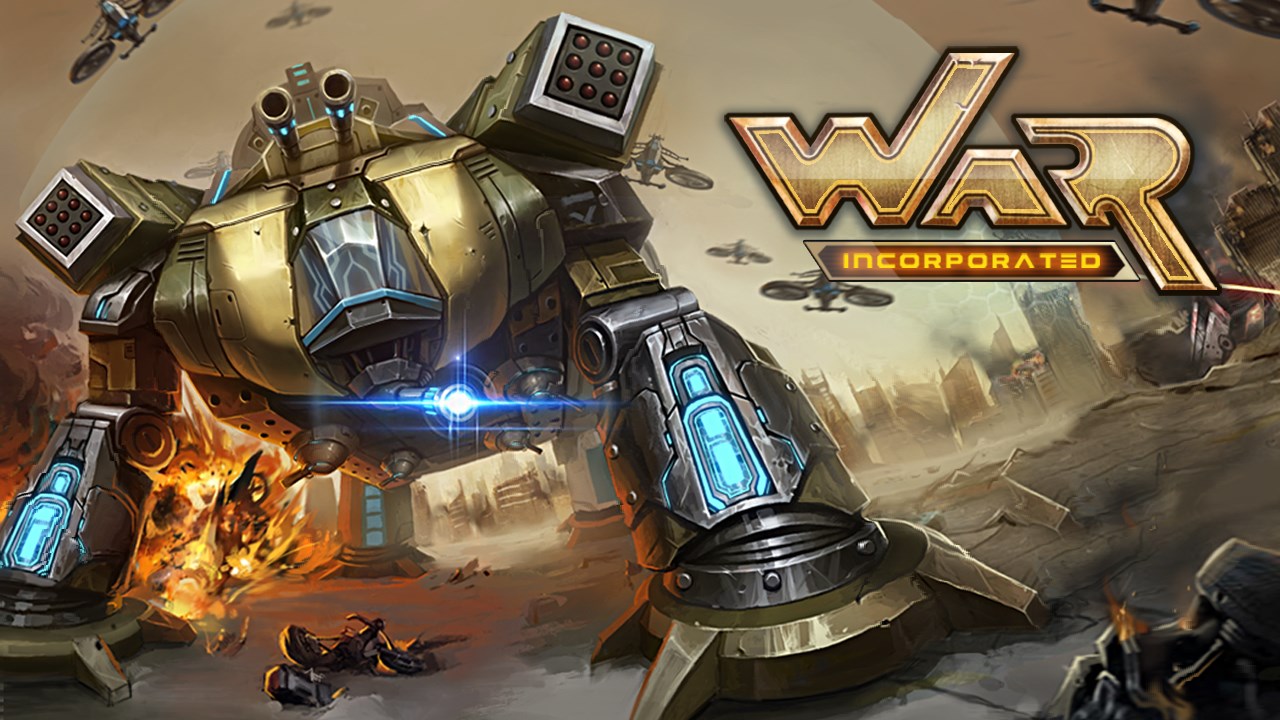 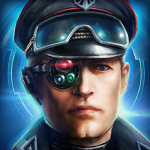 Commander! The new war is about to begin. EASYTECH will continue to create the most outstanding war strategy games as we always do. ***Command over 70 kinds of most advanced army, navy and airforce units. ***Each military unit has its own feature. Use them wisely and you will be invincible ...
Free 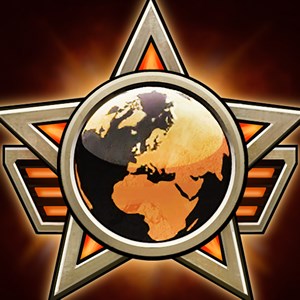 ★★★★★ Conquer the world as General of your own military force. Eliminate the armies of your opponents to stake your claim as the absolute ruler! BECOME A GENERAL AND FIGHT WITH YOUR FRIENDS FOR WORLD DOMINATION In War Game, you lead your army into battle and occupy the continents of the ...
Free 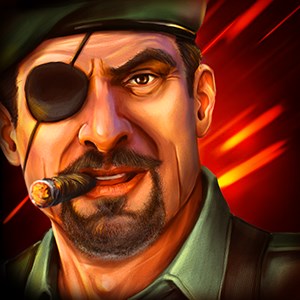 ** Awarded as Best Mobile Game of SBGames 2013’s Independent Games Festival ** Voice-over and soundtrack by the unparalleled composer Carl Clark GET READY FOR WAR Prepare yourself, soldier! The maniac villain Terror has readied his devious machines for war and is launching a massive offensive against our allies’ bases around ...
Free 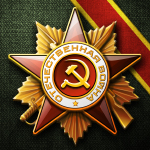 Commander！ Over 60 campaigns in 4 battlefields of World War II are waiting for your challenge. 102 world famous generals will participate in this war with you. Over 300 real and rich terrains will influence your strategies. Player needs to make adequate use of battlefield terrains and defense facilities as ...

کامل بخونید. Thanks for so nice game I want give 5star at the first but every day I play this i find more bugs a. Chat box has many defects and should be better b. If minimize the game for short time and maximize it again, I can't type any thing at all . But it's not happen every time C. Please please please support persian language It's not so necessary for whole game but in chat box it's absolutely necessary برا دوستان بگم که واقعا بازی عالی هست ینی مثل کلش که تو اولین حضورش واقن به دل همه نشس اینم مثل اونه اما مدرن تر. مثل بازیه جنرال کامپیوتر

My favorite ever even got in trouble at work

Glitchy on my Alcatel s4 idol...good game but get real slow

great game, takes a lot of time and patience in higher levels... pairs u against 5-8 even if u r beginner and cost of rebuilds are too high.... great time killer... that's about it